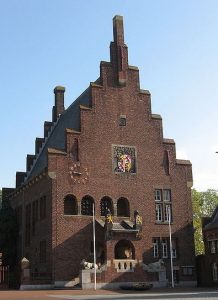 The former town hall of Waalwijk rises proudly and invitingly in the center of Waalwijk, on the Raadhuisplein 2, in the heart of the Langstraat. The building is a national monument, built in 1931-1932, designed by Dutch architect Alexander Kropholler (1881-1973). It is an impressive and unique creation in many ways. A building rich in twentieth century architectural history.  A building that means a great deal to the residents of Waalwijk.

‘making space and facilities available in the Rijksmonument Krophollerhuis to be managed by the Huis van Waalwijk foundation to:
– institutions,
– associations,
– foundations and groups to organize educational events and meetings in the field of art, culture for education purposes and democracy. ”

The House of Waalwijk Foundation aims to facilitate and mediate, among other things, with regard to temporary exhibitions that are then carried out by project applicants themselves.

Transform the former Kropholler building into a new, inspiring and warm beating heart of the city. To an inviting monument that will be experienced by House of Waalwijk on cultural / historical grounds as an indispensable source of inspiration for young and old. Now and in the future.

The House of Waalwijk Foundation works closely with the Arts Center of Waalwijk, associations, and companies from Waalwijk. Interested may contact the foundation’s secretariat, which is located in the

For questions regarding viewing and guided tours you can also go to:

History of the building 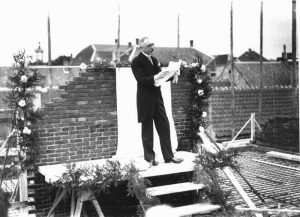 During the 1931-1932 crisis years, a town hall of allure was built in Waalwijk. Alexander Jacobus Kropholler, one of the most important Dutch architects of the last century, not only created a particularly unique building, but also all the interior details. His design included all the buildings around the Raadhuisplein, as well as the romantic inner garden to the left of the town hall.

Architect Kropholler (Amsterdam 1881-Wassenaar 1973) was self-taught. He was influenced by the French architect E-E. Viollet-le-Duc and his disciple, Dr. P.J.H. Cuijpers. The style of architect HP Berlage is also visible: honest use of bricks, emphatic application of natural stone and clear construction. Furthermore, it is characterized by the ideas of the Delft professor M.J. Grandpré Molière. His vision was: “architecture must be based on an ideological will, and that architecture must be able to be seen as an expression of life”. Kropholler therefore paid a lot of attention to the relationship of the structure and its environment. The House of Waalwijk therefore forms one architectural whole with all the other adjacent buildings.

The House of Waalwijk inside and out

A monument and beautiful museum in Waalwijk has a large, hand-shaped warm red facing bricks in light gray joints giving the building a friendly character. The steep roof (dimensions of the building are incidentally: length 24 m, width 18 m and height 35 m) is covered with Norwegian slates, bearing the fairytale name: ‘Gud brandsdalens skifer brud ‘. The stepped gable also impresses the visitor with the stylish coat of arms of Waalwijk (3.5 x 3.5 m), and the loggia with the clock above it on a hedgehog pane. A sandstone cow and an ox, symbols of the traditional leather industry and animal husbandry, guard the granite stairs from the landing to the main entrance. Two lions with the arms of the Netherlands and the province of North-Brabant, a façade needle and three heavy, people-colored anchors complete the whole. The windows are set with antique glass, which can only be viewed from the inside. All doors are made of Java teak and finished with hand-forged door handles, and foot plates. The iron bars, railings, bronze door fittings, masonry are proof of Kropholler’s exceptional craftsmanship in detail . 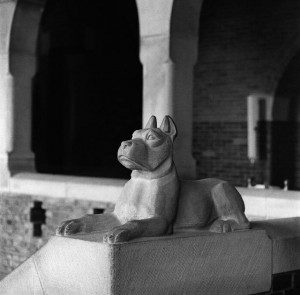 His harmonious architectural style can also be found inside the building. The walls of the hall, the stairwell, connecting rooms and corridors are made of different, colorful types of stone. All combined with matching glazed paneling. Sandstone columns, brick arches with attachments and the curved vault make the interior lively and graceful. The whole is also rich in exclusive types of wood used in ceilings, doors, furniture, etc.  Everywhere there are artistic details. Various clocks remind the visitor “to mind the time”. In the hall, corridors and rooms portraits of three generations of the royal family can be admired as well as a large number of art objects from famous visual artists such as:

Throughout the entire building, philosophical and faith-based proverbs complete the unique ambiance. Also humor is not lacking. Near the former reception office appears the saying: “Bear each other’s burdens.” In the council chamber, the coat of arms of Baardwijk, Besoyen and Waalwijk refer to their separate council status before the merger as one city in 1924. 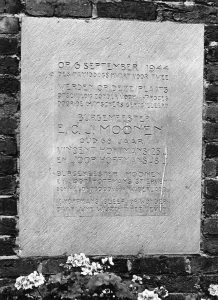 At the rear of the building, a memorial plaque on the wall recalls the dramatic event that took place there on September 6, 1944.
Mayor E.J.C. Moonen 68 years old, Vincent Hoffmans 25 years old and his brother Joop Hoffmans 16 years old stood here before the firing squad of the German occupiers. Vincent Hoffmans miraculously survived this horror.

Extensive information about the construction and design of Het Huis van Waalwijk can be found as a PDF file at: www.wolluk.nl/documents/het%20raadhuis%20en%20raadhuisplein.pdf